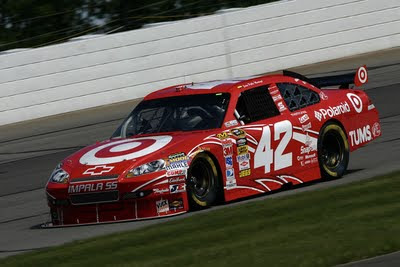 Monday Night NASCAR
Some thoughts on the extended NASCAR weekend:

First, I kind of like Monday races (when I don’t have to be there). You sort of get that old naughty feeling when you watch them on TV or in person. The kind of feeling you used to get when they played World Series games during the day and you played hooky or hid a transistor radio away. When you watch or listen, it’s like you’re putting one over on the boss or your grade-school teachers.

Second, let’s not get all frothy over Monday’s Pocono event. It was not a great race. It was a great final 50 laps with a good finish. Before that, it was your usual game of big-oval hide and seek. Get to the front, get into clean air and start measuring the distance between first place and second place with the big hand on your watch. Please, no calls for a third race for Pocono or extending the current two to 600 miles each.

Which brings us to: Third, four hours at Pocono equals too long. I join the chorus in urging the race be reduced to 400 miles. Even being naughty on a Monday gets old after the three-hour mark.

Fourth, it just may turn out that Jack Roush made the wrong move by turning Jamie McMurray loose and keeping David Ragan (pictured above). Or it may be time to send Ragan back to the minors and bring up Ricky Stenhouse Jr. or Erik Darnell or Colin Braun. Ragan appears freaked out by his rapid descent from Chase near-misser to moving chicane.

Fifth, Juan Pablo Montoya is not giving up that Chase berth. He apparently feels an absolute need to make the playoffs this year. And not because his job depends on it. It doesn’t. The way he has driven this year, the man from the really deep South would be a hot commodity should his contract expire — and not just in NASCAR. How much time is left on that contract? Montoya said he his not sure. Somewhere between one and five years he said earlier this year.

Sixth, Iowa Speedway may indeed be a good place to hold a Sprint Cup race. Good racing, good fans. But a plea to the NASCAR schedule-makers who may be considering such a move: Give it a date which is NOT during ESPN’s portion of the broadcast schedule. Track designer Rusty Wallace was like a preacher with a microphone as he thumped the tub for Iowa, Iowans, corn, his track on ESPN. He was still at it Monday night and the guess is, he will still be at it next Monday night.

Seventh, a scary thought. What if Darrell Waltrip built a track?

Eighth, and finally, the line of the weekend come courtesy of Randy LaJoie on ESPN’s Nationwide telecast. He called start-and-park NASCAR’s version of Cash for Clunkers.
Posted by FIX at 3:17 PM No comments: